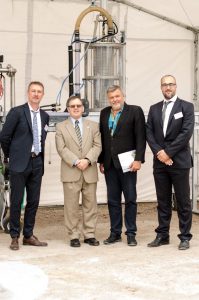 In the framework of the seminar “The complete solution of hygiene and sludge disposal” organized by VODA CZ in České Skalice in June 2018, Professor Hlavínek participated in negotiation with the Ambassador of Israel, Mr. Daniel Martin Meron, on cooperation and transfer of know-how in the field of waste water treatment and treatment of sewage sludge. Professor Hlavínek introduced the research topics of the EGAR group and discussed with Meron some possible areas of cooperation with the Israeli Agency for International Development Cooperation (MASHAV).
In 2015, total water demand in Israel amounted to about 2.2 billion cubic meters. The average amount of water every year added to Galilee Lake and the main aquifers over the last 10 years was less than 1.2 billion cubic meters. The difference between demand and natural resources should therefore be more than 1 billion m3 in 2015.
The main achievement of Israeli water management is that it has managed to fill this huge deficit and achieve sustainable demand. It is the result of a combination of (1) water conservation, (2) reuse of waste water, and (3) desalination of seawater and brackish water, increasing the supply by more than 1 m3 per year. With the use of recycled and desalted water, Israel is no longer dependent solely on renewable sources of fresh water; as a result, the consumption of renewable freshwater per capita has fallen dramatically. However, the situation remains complex. Demand for water rises year after year due to population growth (since the founding of the state, its population has increased tenfold) and raising the standard of living. At the same time, the amount of precipitation decreases on average by 10-15% as a result of climatic changes every 30 years.
According to current forecasts, demand for water will be about 3.5 billion cubic meters per year in 2050. At the same time, the average amount of naturally-sourced resources will be reduced to less than 1.1 billion m3 per year, resulting in a deficit of 2.4 billion m3 per year. That is more than twice the difference existing in 2015.
In order to cover this shortcoming even in the coming decades, Israel will continue to save water and increase the extent of water treatment, recycling and desalination. An example of systems developed in Israel is droplet irrigation, advanced methods of filtration and detection of water leakage systems for rainwater collection and treatment, water supply and technology for smart cities.
An important element that has made it possible for Israel to balance the gap between consumer demand and available water supplies has proven to be the use of municipal waste water as a new resource, especially for agriculture. Waste water is a constant source of water throughout the year, independent of climate fluctuations. They only result in population growth and living standards. Water recycling means that all waste water must be collected, secondary or tertiary, then the treated water must be transported to the reservoirs, service stations and water supply networks from where it goes to the field. The system also includes a highly sophisticated regulatory and tariff system. In 2015, Israel treated and recycled 86% of its wastewater for agricultural use, making it the world’s first water recycling facility. Over the next decade, Israel plans to increase its share of reuse to 90%. Israel is simultaneously modernizing wastewater treatment technologies to include tertiary cleaning that allows unlimited irrigation.
As far as water is concerned, in the past few decades Israel has become a miracle. By setting priorities and adopting a holistic approach to water consumption, including good governance, the development of advanced technologies, and public education, Israel has become a world superpower in the field of water management.