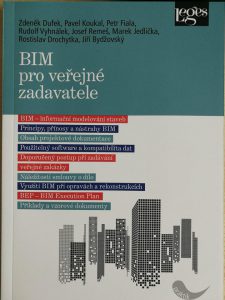 In May 2018, a team of colleagues from the AdMaS Research Center published a publication called BIM for public contracting authorities.

The publication briefly introduces the BIM issues. It contains legal and technical aspects of the selection of the supplier of the project work. Also, it includes examples and BEP and EIR sample documents, tender documentation and work contract. These patterns are also available in electronic form.

The publication was published by Leges, more detailed information can be found here: 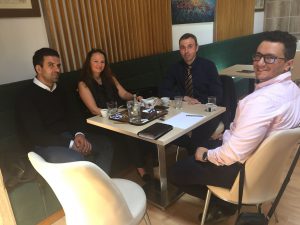 As part of the “Sending Experts” Program of the Czech Development Agency on the project “Support for Building Specialization in Civil Engineering at Burch International University in Sarajevo based on needs of building practice  in Bosnia and Herzegovina”,  a group of FAST and AdMaS employees visited Burch International University (IBU) in May 2018. The aim of the stay was to analyze the current situation and a way to help with the introduction of a new study program.

The Czech group provided practical lectures for students in the fields of “Super Insulation Materials”, “Polymer Cement Matters and Composites” and “Testing of Concrete and Aggregate in Concrete”, followed by a discussion to verify students’ interest and response on the design of a new study program.

During the visit, the Czech group discussed with represenatives of Bosnia and Herzegovina building industry, defining the possible potential of their cooperation with the IBU with the support of the Czech Republic (namely BUT).

The result of these negotiations is an agreement to evaluate the curriculum of the new study program, to propose its modification so that the program can be run with the smallest demands on human resources and as far as possible to meet the standards and current requirements of the EU and BUT (for future exchange of students and teachers between the two universities). In addition, it was promised to help to provide IBU with sufficient instrumentation and laboratory facilities.

There was also a meeting with the Head Consul of the Consular Section and the Development Cooperation Division of the Embassy of the Czech Republic in Sarajevo, Mrs. Jan Zelinger, and the Co-ordinator of the Development Cooperation Section, Mrs. Anesa Terza Vukovic, whom was presented the project of the Czech Development Agency and the possibilities of further follow-up cooperation in the area of standardization of construction (EUROCODE) on a new project implemented by the Office for Standards, Metrology and Government Testing of the Czech Republic in cooperation with the BAS of Bosnia and Herzegovina. 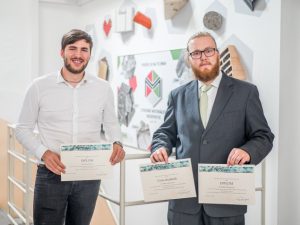 On May 17, 2018, an international round of Student Scientific Professional Activities (SSPA) took place at the Faculty of Civil Engineering in Brno. Bc. Radek Hermann of the Building Materials Engineering (M field), who is currently working with the AdMaS Center on several research projects, has been able to engage both the jury and the other students, and has earned the first place in his section.

Tom Kocmanek, as a future bachelor, won a beautiful third place, which is an excellent take off for next year. 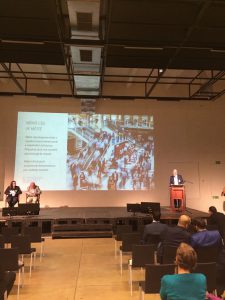 On 16 and 17 May 2018, the AdMaS Center participated again in the Conference on Transport Infrastructure . The event traditionally took place in the premises of the Litomysl Chateau Brewery. In addition to the exhibition stand the center was presented with professional lectures. Doc. Tomas Apeltauer had a lecture on The use of simulation tools in the protection of soft transport infrastructure objectives, doc. Vit Hromadka lectured on Risk Analysis of Transport Infrastructure Projects.

The conference proceedings were further enriched by article on Crossing Projection – Viewing Triangles by dr. Michal Radimsky and Ing. Radka Matuszkova. Director of the Center, dr. Dufek, was the moderator of the lecture block on Strategy – Vision – Planning.

On May 9, 2018, the Czech Television Studio CT24 broadcasted a story about the modernization of the D1 motorway. As a guest in the studio was employee of the AdMaS Center, prof. Ing. Jan Kudrna, who spoke about problems on the aforementioned highway. 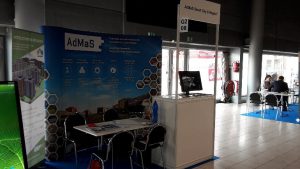 As part of its Smart City activities, the AdMaS Center presented itself as one of the exhibitors at the Urbis Smart City Fair (part of the traditional construction fairs in Brno) on 25-26 April 2018. Researchers from EGAR RG presented the activities of the center at a stand, where mathematical evacuation models of high density populations or 3D simulation passes of selected locations acquired by the mobile mapping system took an active role. Also, doc. Tomas Apeltauer presented this theme actively on the accompanying conference program.

In the area of Smart City, the AdMaS Center offers studies of the application of technology in various areas of city and community activities – environment, transport, energy, as well as specific urban engineering suggestions, such as heat exchangers that use the sewage potential as a source network to model traffic intensity. 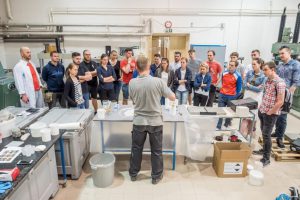 On 19 April 2018, MC-Bauchemie, working closely with the AdMaS Center, has prepared an expert seminar to illustrate the results of the joint research tasks.

The seminar was organized for first year students of Master’s Study of Building Material Engineering (M field) and focused on a wide range of different types of grouting materials for redevelopment of buildings. The lecture focused mainly on materials preventing penetration of water into building structures. Students had a unique opportunity to see practical demonstrations of the behavior of different types of mass after their application and their reaction to water contact.

On April 17, 2018, students of High school Krenova visited the Center and its Pavilion P2. During the two-hour seminar focused on basic physical phenomena, the students were introduced to the laboratories of the Center and solved problems in a cubic capacity of building materials and a concrete strength.

Each student received a protocol form in which he recorded the results of each task. For example, using quiz questions and without removing plastic eggs, students had to determine what is inside. Another task was an identification of building material in an image of enlarged structure. This way was demonstrated the principle of an X-ray tomograph and an electron scanning microscope. 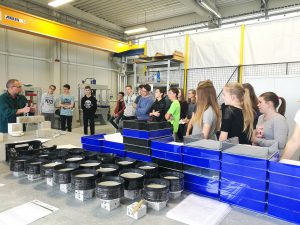 On Monday, April 16, 2018,  a 15-member delegation from the Guangdong Province of China, accompanied by three representatives of the South Moravian Region, visited the AdMaS Center.

The visitors were greeted by the Director, JUDr. Ing. Zdenek Dufek, Ph.D., and the Scientific Director of the Center, prof. Ing. Drahomir Novak, DrSc., who acquainted them with the research,essence and goals of the center.

Afterwards, the delegation took a round with Ing. Nekulova and dr. Dvorak through construction  and RP1 laboratories.

Among the significant political and business visitors was also Song Wenqi, Director of the Huawei Business Department of the Czech Republic. However, the delegation was headed by Provincial Governor, Mr. Ma Xingrui, who obtained a Masters Degree in Mechanical Engineering at Tianjin University and a Doctor of Mechanics at the Harbin Technological Institute. After studying, he worked as a lecturer and held various senior positions at the Harbin Technological Institute. He then worked in a science and technology company with a focus on aerospace industry. Subsequently, he was the director of the China National Space Agency, where he was responsible, among other things, for the implementation of the Chang’e 3 (chang-e) project. The project consisted of launching a space probe designed to explore the Moon – the probe had descended on its surface in December 2013.

Mr. Ma Xingrui, became the governor of Guangdong province in 2017. This region is the the fourth most populous province of China (but  unofficially the most populous province) and the richest region of China with the largest GDP, known mainly because of its traditional craft products. Among the most important products are keys, knives, flashlights, umbrellas, leather goods, embroidery and carved mahogany furniture.

The Public Procurement Office of the BUT Rectorate and the Institute of Building Economics and the Management of the Faculty of Civil Engineering organized a two-day training course in March, focusing on the innovative method of awarding contracts and managing the project in general – the Best Value Approach. This method has been developed in the US more than 20 years ago, and has been in the recent years of great interest in the Netherlands and Norway. Gradually, this method is also attempted to implement the Brno University of Technology.

The Best Value Approach (BVA) method is based on a completely different concept of procurement and project management in general. It is based on the assumption that the subject of the contract is best understood by the contractor-expert who executes the orders of the given type for a long time, not the contracting authority, who sometimes orders certain contracts once during its existence. “The BVA method leads the contracting authority to focus on defining the expected result, the goal, not the way the goal is to be achieved when choosing a supplier. This will enable high-quality suppliers to compete against competitors, “said Petr Jelinek, head of the Public Procurement Department at BUT.

The method is generally applicable to all types of contracts, but the most advantageous is especially for service contracts and construction contracts, which include design-and-build design. “At the department, we try to gradually apply the method to smaller construction orders, and we are also preparing an over-the-limit clean-up service contract that we would like to use BVA more,” Jelinek added. Thanks to the new method, vendors could get more space to showcase their experience, know-how and quality. It is precisely up to them how they reach the target.

Petr Jelínek graduated from the BVA last year in the Netherlands and organized a similar course for BUT administrators and their colleagues from Masaryk University, the South Moravian Region, the Ministry of Agriculture and other contracting authorities, in co-operation with AdMaS Director of the Faculty of Civil Engineering, dr. Zdenek Dufek. “The participants gained basic theoretical knowledge and practical skills directly from experienced BVA trainers and practitioners from Best Value Europe. The BVE Director, Susan van Hes, as well as her colleague, Albert Mulder, came to Brno. The construction market in the Czech Republic has not been in good shape for several years, it is struggling with the phenomenon of low bid prices and poor quality results. In the Best Value approach, I see one of the ways to return quality to the industry, “said Dufek.