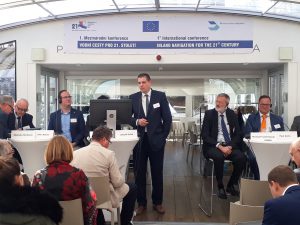 Director of AdMaS Research Center, dr. Zdeněk Dufek, attended the international conference Inland Navigation for the 21st Century, which took place in Prague on 1 April 2019. In his contribution he informed about the progress of the project of our research center focused on the design of technical regulations for the safe construction and operation of LNG refueling stations. This alternative fuel is becoming a reality even in the Czech Republic. Last year, the Ministry of Transport announced a subsidy call to support the construction of LNG refueling stations, which were used by several entities. By 2022, more than a dozen LNG refueling stations can be expected to be put into operation. Among other things, it offers the possibility of placing LNG stations in ports close to major road routes. To do this, it will be needed to create safety regulations so that the stations can be designed, commissioned and operated safely.