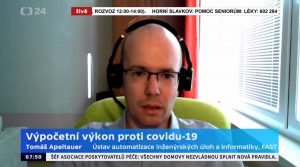 On March 28, 2020, the head of the Institute of Automation of Engineering Tasks and Informatics and at the same time an employee of the AdMaS Center, Assoc. Prof. Tomas Apeltauer, at the Czech Television Weekend Studio, where he explained the operation of Folding@home. The team from the Faculty of Civil Engineering at Brno University of Technology connected 282 faculty computers to the activity, thanks to which they are now among the 3% best teams in the world.

Folding@home is a distributed computing project that uses volunteer-connected computers connected to the Internet to simulate protein folding. The results of the simulations are used, for example, to investigate poorly assembled proteins in cancer, Alzheimer’s disease, Parkinson’s disease or brittle bone disease. Based on the results of Folding@home, 223 scientific papers were published as of March 2020. In 2017, an estimated 28,000 volunteers and a total of 100,000 CPU or GPU Folding@home events were involved in the project.

During the COVID-19 pandemic in 2020, the development team announced its intention to address SARS-CoV-2 proteins. On March 13, Nvidia invited computer gamers and generally compatible GPUs and CPUs to join the project, lending more than 400,000 volunteers to their computers in a matter of days. The overall performance of the system has exceeded the combined performance of the world’s 103 most powerful supercomputers and continues to grow.