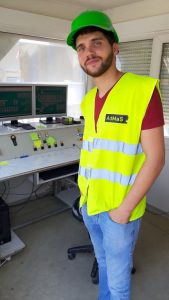 In August we welcomed 2 foreign trainees to the road laboratory of the AdMaS Research Center.

On August 6, 2019 arrived first student, Arnaud Chuter from France, who is studying civil engineering at EI.CESI University in Angoulême (https://angouleme.cesi.fr/ecoles-formations). Arnaud’s specialization is traffic construction and will stay here until October 25, 2019.

Both students are very active and have been involved in research activities both at the AdMaS Center and the Institute of Roads. They are also cooperating on solving partial tasks within current research projects. One of them is a project of the Technology Agency of the Czech Republic TH04020154 entitled: “Optimization of the construction, repair and operation of asphalt-concrete sealing cladding”. So far we are very satisfied with both students.

Arnaud Chuter already participated in excursion to the mixing plant in Rajhradice, where he assisted in the sampling of aggregates. In the months of September and October, further professional excursions to cooperating companies or directly to the road construction are planned. Last but not least, there is a plan for a joint discussion of students of the 2nd year of the Master’s program with a focus on traffic constructions.